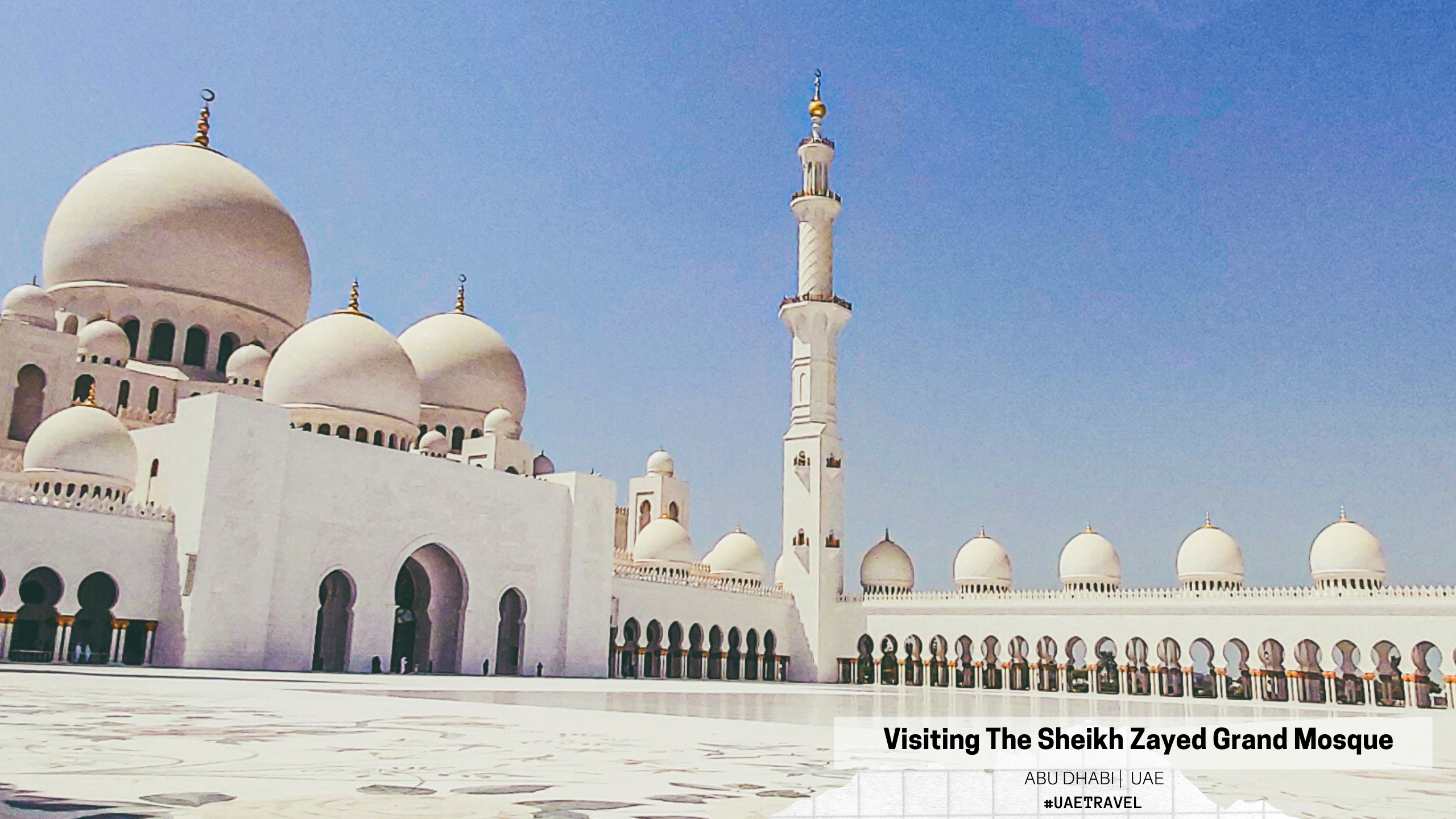 I visited UAE in September, 2019 and The Sheikh Zayed Grand Mosque in Abu Dhabi was a serene and immensely marvelous place. Not a very religious person but I love Architecture. I also love learning about different cultures. So yes, The Largest Mosque in the country had to be on my bucket list. We got there by car around noon and spent more than two hours exploring the place. The place is huge with its own parking facility, and has a lot of souvenir boutiques to explore before you enter the mosque. So we went all touristy and began the search for an Abaya 😛

Shopping for an Abaya

So “Abaya” is basically a loose robe like garment and can be worn with a niqaab. I knew a lot of Muslim women wore this but only the first time I learnt what it’s called. Excuse my ignorance 😛 . Unfortunately, I could not find a single one even close to my size except for this one which turned out to be too expensive. Oh Well! So here I was staring at the intricate sequins work and contemplating if I really need something I am barely going to use? 😛

The enthusiastic shop assistant even offered to put the niqaab for me. For a moment there I kind of seem like a completely different human being altogether 😛 . Either ways,we knew we could borrow abayas to wear inside the mosque so we did not end up purchasing it. However,We did end up buying little carpet coasters.
Some of the traditional clothes for women were really pretty and authentic and you are bound to get spoiled for choice by the dozens of shops inside. Unless, you are as petite as me, than good luck!

The Courtyard features floral illustration designed by the British Designer- Kevin Dean. Various flowers that can be found in the Middle Eastern region – mostly irises, tulips, lilies and roses can be seen incorporated in the design.

The Grand Mosque features a total of four minarets and 82 domes with a capacity of 40,000 people. It’s marble clad walls gives it the stark white feature that contrasts with the clear blue sky. Designed by the Syrian Architect Yousef Abdelky with the support of British, Italian and Emirati architects. The mosque includes aspects inspired by designs from Turkey, Morocco, Pakistan, Egypt and other Islamic countries.

The Corridors with their palm like pillars and Moorish archways influenced by the Mughal Architecture was extremely overwhelming with its craftsmanship.
After we entered the corridor, there was a sign guiding us towards the separate abulation areas for ladies and men to perform the “Wudu”. It  involves washing the hands, mouth, nostrils, arms, head and feet with water and is an important ritual before praying.

For the entrance to the mosque’s main prayer hall – the only part of his design where floor mosaics are transferred to the walls – Dean used morning glories and the desert-dwelling ­Pergularia tomentosa. It is supposed to be a wild plant you find in the desert.
The detailing put into each element of the mosque is exclusive and reflects incredible craftsmanship from around the world.
I loved how beautifully everything compliments each other even with the heavy patterns found all over the place. The walls also had a lot of calligraphy on the walls that showcases the different names for the Prophet.

The seven glamorous Swarovski Chandeliers that are hung from high detailed ceiling compliments the precious gems and crystals that glitter below and doesn’t go unnoticed. The chandeliers made up of gilded stainless steel and brass adorned with approximately 40kg of 24-carat galvanized gold are imported from Germany.

There was an Islamic Clock outside the prayer room that displayed Prayer Times or “salat” which is part of the Five Pillars of Islam. The people are usually reminded of the salat  by the daily calls to prayer, known as “adhan” which are delivered from the mosque by the muezzin, the mosque’s designated caller of prayer.
I used to work near a mosque, back in India. And got in the habit of clocking my lunch hours according to the Adhan. This way, I knew I wouldn’t forget to eat. 😛

The detailed ceiling in the prayer room is absolutely stunning with its Swarovski Chandeliers and intricate patterned walls. But the one thing that blew me away was the huge carpet laid out on the floor reflecting a similar floral design as the courtyard and other parts in the mosque. Designed by the Iranian artist Ali Khaliq, the Persian rug finds its home in the Mosque with it’s prominent green color. A total of 92 columns inlaid with mother of pearl and marble can also be found in the prayer room

A. The Mosque is usually open from Sat – Thu from 9:00 am to 22:00 pm. On Fridays, 16:30 to 22:00 pm. We went on a weekday to avoid the possible crowd. But, if I get a chance to visit again I would probably want to see the mosque all lit up after the sun set. Be mindful if you’re visiting during Ramadan, as I believe the timings do change.
B. I would also carry my sunglasses, as it gets pretty sunny and the stark white marble cladding doesn’t help.
C. Dress modestly. They are quite strict about the dress code. However, they do provide Abayas free of charge and there are rooms for you to change before entering the mosque. So don’t worry if you aren’t carrying something to cover your head.

Unlike other tourist attractions in UAE, The entry to the mosque is absolutely free which makes it an even more budget friendly option to add to your itinerary. This was the first time I have ever visited a Mosque as most of them aren’t open to Non Muslims. This was extremely enlightening and a beautiful experience. Also, the incorporation of global architectural elements and craftsmanship makes this the star attraction in Abu Dhabi.

This site uses Akismet to reduce spam. Learn how your comment data is processed.

Hello Beautiful People!
I am Monica Shastri, the person behind this blog and a Interior Designer by profession.  I grew up in India and currently live in England.

This space documents things I do, wear, eat, places I go, and people that inspire me.